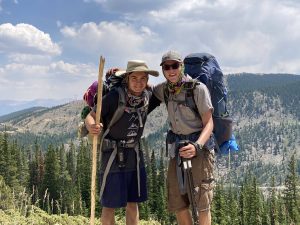 (Note: Sam and all of the other students mentioned are Mackintosh Academy alums from 2017-2020.)

When I was in 7th grade I had a rather silly ambition; I wanted to hike from the front door of my house in Littleton to the front door of my grandparents’ house in Snowmass. For a good many years this remained more or less an idle dream that I’d bring up every once in a while but never act on. That is until this summer.

I texted my dear friend Quinn, and together we began to plan. Over the course of two weeks we scraped together the outline of a backpacking trip, we planned meals, determined our route, and coordinated with friends to join up with us along the way. After two weeks of preparation, we were prepared, we took up our packs, and set off for the great unknown. To put it simply, we had no clue what we were getting ourselves into.

The first few days proved far more challenging than we’d originally anticipated. As we hiked up Waterton Canyon, we bumped into a group of several other hikers. It was lucky we did, it turned out that Bear Creek, the one reliable water source for the next 12 miles, was bone dry. We loaded up on water, bracing ourselves for a dry couple days. With nearly 10 pounds of water weight each we staggered off. At Bear Creek we got a tip off from a random guy on a bike that we could access water after a ten minute hike. The next day we passed the South Platte; it was a truly brutal day. The sun was hot, we were passing through a burn scar, and we each had to take 10 pounds of water again. From there the going got easier, we entered Lost Park and water became much more plentiful. The distance began to fall away as our bodies grew stronger, we slowly got our trail legs beneath us.

In no time at all, we were hiking down the switchbacks that lead into Breckenridge. It was the first hard day since the South Platte, Quinn and I were tired and it’d been a hot long day. It was also the day Gillian was planning to join us. After she joined us, we hiked another three miles into camp. This, it turns out, was lucky, as the next day we were set to go over a pass and it would’ve been an incredibly difficult day at its original 13 miles. The next day we were up bright and early to hike Walker Pass and camped that night in the Copper Ski Resort. Two days and 20 miles later we arrived at Tennessee Pass. Gillian left us and Henry and Ember joined our crew of merry folks. We had entered our final day on the Colorado Trail. It was on the shores of Turquoise Lake (more of a navy in my opinion) that we were set to make our first fateful steps into the unknown away from the well marked Colorado Trail. At least that was the plan. 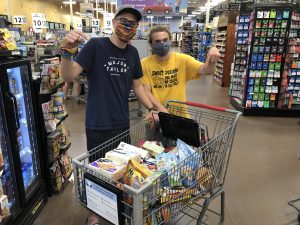 Our next move was to follow a winter trail up to Skinner’s Hut. The one problem, we couldn’t find it. We had traveled nearly 10 miles that day and we were all exhausted, so we decided to make camp for the night. That’s when we encountered our second “spot o bother.” Turns out, teenagers eat a lot. Seated there, our plans already awry, Quinn and I realized we didn’t have enough food. After some frantic attempts to contact my parents, a brief hitchhiking trip, and a lot of discussion, we finally got an emergency restock planned. The challenges did not end from there, but we trail hopped our way through the backcountry of Aspen. 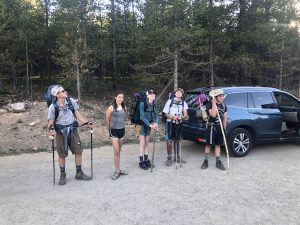 Several times we didn’t have a trail and had to bushwack our way, relying on instinct as much as map and GPS to guide us. It was in this way that we finally entered Lenado, Colorado  (a town of approximately 5 people), a band of tired wayfarers. In Lenado we were met with hospitality and kindness, meeting unexpectedly with a few old family acquaintances. The next day we were in Aspen, eating in our first restaurant after nearly 20 days on the trail. We camped on the Buttermilk Ski Aria (semi-legally), and in the dead of night Ember saw our first bear of the trip! After many hard days of travel, our goal was in sight. Hemmed in with flames, our schedule had to be moved up a little. It was that afternoon that we finally entered Snowmass Valley, re-tracing familiar ground. And finally, with tired eyes, we saw our goal. The finally few steps simply flew by as we walked up the driveway to my grandparents house. 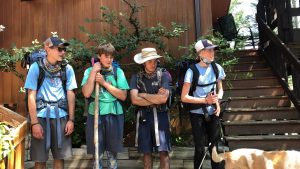 Sitting in the car on the drive home, I reflected back on what we’d done. This had been a trip I had been dreaming about for nearly four years, and I had just finished it. Now, after nearly 20 days of continual walking, we finally had a chance to sit and reflect. All of us sat there in our separate worlds. I can’t speak for my companions, but I found myself dwelling on the first day of the trip, the excitement I had felt, as well as the uncertainty. We had all grown so much from that first day, both in strength and character, and even as I began to drift off, I smiled a little to myself content in what we had accomplished. 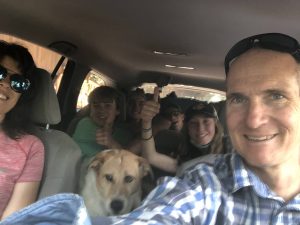