Pi Day Celebrates the Joy of Math (and Pie!) 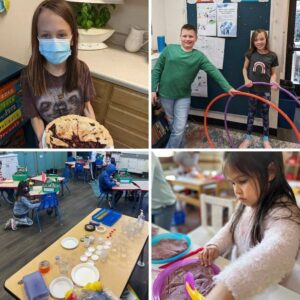 Mack students and teachers celebrated Pi (π) Day on Monday. First declared an unofficial holiday in 1988 by physicist Larry Shaw, Pi Day celebrates the mathematical constant of pi (Greek letter π), which begins with 3.14 and has been calculated to over 50 trillion digits.

Pi Day is observed on March 14 because in the date convention used in the United States (month-day-year), 3/14 aligns with the first three digits of pi. Although other countries do not use this date convention,  Pi Day has caught on around the world.

Another fortunate coincidence that adds to the appeal of Pi Day is the pun on pi and pie – and the fact that most pies are round – leading to some tasty crossover activities!

At Mack, Pi Day celebrations are a longstanding tradition. The day provides teachers an opportunity to explore the concept of pi with even our very youngest students. As a bonus, these lessons are often accompanied by a slice of pie!

First and second graders in Ms. Monroe’s math class read Sir Cumference and the Dragon of Pi to build a basic understanding of this special number. The first graders also practiced measuring the circumference and diameter of circular objects using rulers and yarn.

In Ms. Guilbert’s third and fourth grade math class, students measured a hula hoop with a piece of string taped around it. They then measured the diameter of the hula hoop in centimeters, multiplied it by pi, and cut that length of string. After taping that string around the hoop, they were excited to see the confirmation that it was indeed the correct circumference. Recent lessons have focused on ratios, so students were intrigued to see pi as the ratio between the diameter and the circumference, rather than simply an interesting series of numbers. As a bonus, one student baked an allergy-free pie for her classmates.

Mr. Pausback’s math class celebrated Pi by doing the Buffon Needle Drop test to approximate pi.  Buffon, an 18th century French mathematician and naturalist, approximated pi relatively accurately to about four or five decimal points.  Legend has it that he did this by using a stale baguette. On the floor he drew a series of parallel lines that were spaced apart equal to the length of the baguette. He then tossed the stale baguette over his shoulder a multitude of times, keeping track of the total number of tosses and the number of tosses that resulted in a baguette touching a line. By dividing the former by the latter and multiplying by two, you reach an approximation of pi.

After tossing sticks approximately 70 times, Mr. Pausback’s class estimated pi to 2.795. The class then discussed geometric probability and why this exercise works. In a future calculus class, students will probably do a more complicated version of this lesson. Since the French word for stick is similar to the word for baguette it is likely that Buffon tossed sticks over his shoulder. The class wrapped up the lesson by eating a fresh baguette.

By exploring the concept of pi through fun and memorable math lessons across the school, our teachers boost students’ confidence in and enthusiasm for math.