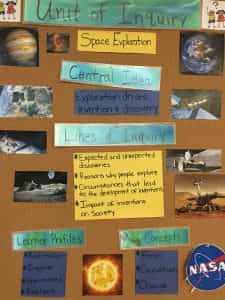 Get ready to “blast off” as we get a glimpse into the “out of  this world” unit the Mack-Boulder second graders just completed. Their IB Unit of Inquiry was Space Exploration with the central idea, “Exploration Drives Invention and Discovery.” Teachers Jenny Bolch and Kim Granger kept a “space log” of sorts to keep parents informed as their journey progressed. Note the way the teachers combined science, social studies, reading, writing, and “soft skills” to create a dynamic learning experience.

We built a solar system to scale in a 100 foot distance to begin to understand the concept of scale and how far away some planets are compared with others and what that means for long distance space travel. Students also got to practice some measuring in inches in this activity. 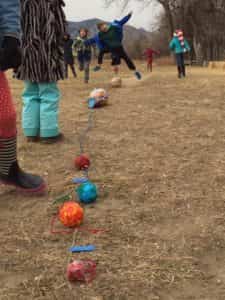 After beginning to understand the concept of long distance space travel, we learned about some of the challenges that space scientists are currently working on solving to allow for long distance space travel such as food and water for such a long journey without taking up much space, soil, or water. Other challenges included things like running out of fuel after a long distance, the effects of weightlessness on your body, radiation, communication with earth, and more. Students worked in their design teams to brainstorm and plan and prototype ideas to help solve one or more of these challenges.

Students are working in their design teams to design and prototype a space base for the planet that their team studied. This required them to once again apply their planet research and consider what an astronaut on a space base, living there temporarily or long term, might need. We will continue with this next week.

We connected this with our writing focus for this unit of persuasive writing and students each started using a graphic organizer and writing a persuasive essay about why NASA should choose to invest 50 billion dollars in building their space base on their planet.

Students practiced clear, kind, and concise communication skills to work through a challenge with their team by mapping an obstacle course set up in the classroom (meant to simulate rocks and craters on another planet), deciding as a team on rover commands, and then blindfolding a member of their team to be their “rover” and sending them through the obstacle course with commands on where to go to retrieve an alien stuffy at the end of the obstacle course. 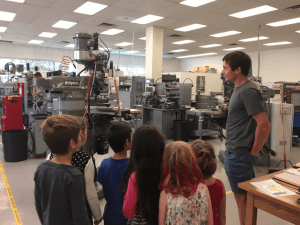 We got a tour of the LASP facilities from two of the engineers. Students got to take a sneak peek into the rover parts lab where they got to see laser cutters that develop the metal parts that belong to a rover. They got to handle different parts of rovers that have actually been in space.

Alan Shepherd was the first to hit a golf ball on the moon in 1971. It went over two miles and they never found the ball. Students learned about simple circuits and did a circuit project in the design lab where they made a lunar lander that connected a circuit to make a golf ball light up.

Then for Grandparents & Special Friends Day, students each built a simple circuit inside of a box. They invented a switch to connect their circuit. Each switch caused a light to light up on their box. Students decided what their button did on the spaceship such as eject astronauts, self destruct, navigation, rocket boosters, serve astronaut ice cream, etc. We then installed the buttons into a mission control panel on our classroom spaceship! 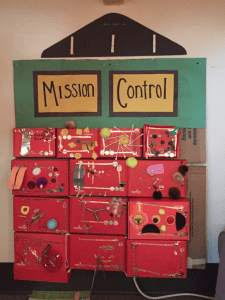 Denver Museum of Nature and Science brought in their inflatable planetarium. They took our students on a tour through the solar system to visit various planets and learn about them. They also told stories of different constellations while showing them on the planetarium ceiling.

Students learned about various ways to insulate something and what insulation means. They each got a bottle of boiling hot water and built insulation around it including techniques like trapping air and reflectivity. Then they used a digital thermometer to take the temperature every 2 minutes and collected data on the rate of heat loss in their water. We connected this to space by learning about ways insulation is important in space such as for astronaut space suits and how scientists design space suits to protect astronauts from extreme heat and cold.

Students built a lunar buggy that could roll down a ramp a certain distance without having their astronauts or cargo fall out. They collected data on how far their lunar buggy traveled down the ramp and how that distance changed with added “cargo” weight (extra jewels.) Then students create a landing pod for their lunar buggy. Their landing pod had to protect their buggy so that their buggy was not damaged in a fall, so the astronauts and cargo stayed on the lunar buggy and intact. It had to have a door or hatch for the lunar buggy to roll out of and the lunar buggy could not be taped or glued into the landing pod. We watched video clips of some real landing pods and techniques that scientists use for landing pods to get inspired and then students worked hard on their design teams to create their own landing pods. They collected data for falls at 4 feet, 7 feet, and 9 feet (off the tall part of the tree house.) and made modifications to their landing pod if it the fall caused damage or the astronauts and cargo didn’t stay secure. We used this opportunity to really practice the design thinking process of prototyping, testing, making modifications, and retesting, etc. As Elena so beautifully put it, “Success is even more juicy and wonderful after you’ve had many failures!” 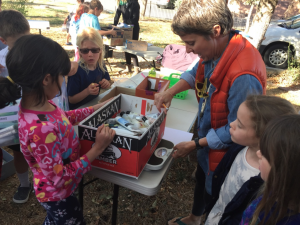 We were the only group at Fiske for our field trip and they tailored the trip perfectly to our class! The presenter showed us the night sky and pointed out some cool constellations, galaxies, and nebulas. Then we watched the video “Back to the Moon for Good” about the Google Lunar X Prize, a prize from Google for scientists to get to the moon and encourage privatized space travel. The kids had great questions and loved having someone so knowledgeable about space to answer them!

After learning about the difference between rovers, probes, and satellites, students finished their planetary rover/probe designs based off of what would be most needed to explore and experiment on the planet their design team has been researching.

Students designed satellites in an engineering project with specific constraints to make it more challenging. Their satellite design had to fit inside of a coffee can and had to be dropped from one meter high without having anything fall off of it or break. Then students used straws and balloons to create rocket launchers for their satellites. We stretched a wire across the basketball court between both basketball hoops to launch the rockets on. Each design team did three trials with three different length straws and collected data on which length of straws launched the rockets the farthest and how far they were launched

On Thursday we went on a space mission simulation! Thanks to the awesome parents who came in and helped out (Shirley, Tatiana, and Alex), students got to experience what it was like to be an astronaut at four different stations (with a bunch of math thrown in!).

After learning a little bit about gravity, at the first station, they jumped, marked their jump length with chalk, and measured it with a tape measure in inches. Then, they used calculators and multiplication to solve for what their jump length would be on different planets. They each chose a couple of their favorite planets and measured those jumps as well to compare how they were different.

At the second station, students weighed themselves on a scale and used calculators and division to figure out how much they would weigh on other planets. They learned about how their mass would stay the same but their weight would change due to gravity.

They made astronaut pudding at the third station by practicing measuring with tablespoons, teaspoons, and cups. They used instant milk and powdered chocolate mixed with water inside plastic baggies. They also learned about what and how astronauts eat in space!

At the final station, students learned about clearly communicating what they are experiencing in space back to base with some scientific writing. After expanding a rubber band 15 times with their hands (similar to grabbing things with a space glove), walking on moon boots, and passing moon rocks through a box with gloved hands, they wrote a few scientific notes about what they had done. 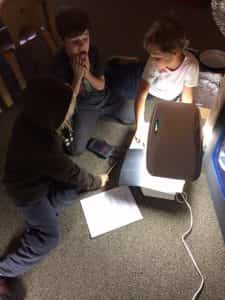 We learned about how our moon and several planets have access to a huge amount of solar radiation either due to close proximity to the sun or to a reduced/no atmosphere. We brainstormed ways that solar energy could be used as a resource for space exploration including cooking in a solar oven. Then students built their own solar oven and practiced collecting data by using a digital temperature probe and writing down the temperature every 2 minutes over a 10-minute period. Most of the ovens increased by over 20 degrees F. We used grow lights to simulate the sun since it was a cold and cloudy day outside, and students got to cook mini s’mores in their solar ovens to see how well they worked.

To follow up learning about what it’s like to be an astronaut (we read many books about astronauts and articles this week), students worked on persuasive writing (our literacy focus for this unit). They learned how to used a graphic organizer to plan their persuasive writing by starting with a topic/position followed by 3 reasons (each supported by 3 facts, and a closing statement). They wrote to NASA about why NASA should send them to the moon to live on a lunar base for 6 months to conduct research on the moon.”