If you were lucky enough to be at one of the standing-room-only performances of the recent Mack-Boulder 5th-8th grade musical “Theseus & the Minotaur,” you are probably still humming some of the catchy and wonderfully-performed songs. It was a stunning production that was the result of many months of hard work by director Julie Chilton, assistant director Tim King, the performers, costumers, set designers, and the stage/tech crew.

While “Theseus & the Minotaur” was polished and even professional, and there is certainly an important place for that kind of a production, there have been many other performances this year of a different nature: work-shares.

Work-shares are assemblies that are an amalgam of a performance, a play, and a demonstration. For each work-share, the performing class developed, rehearsed, and then presented a “show” based on what they had been exploring and learning in their Performing Arts class. The shows usually include singing, movement, drama, and interesting facts the students have learned about music, movement, or theater.

Students are given the opportunity to organize and create their own program, including which songs to present, and how they incorporate movement and/or drama.  Students also write their own spoken pieces to introduce the audience to each portion of the presentation. Work-shares allow every student to participate in the discipline of practicing and performing without the pressure of needing to produce a polished play.

In addition to the work-shares in lower grades, the middle school will have had two Middle School Arts Nights by the end of the year. (Join us on the evening of May 25th for the final one of the year!) These are more polished and rehearsed than a work-share but still more casual than a musical production. Arts Nights include Visual Arts in addition to Performing Arts. 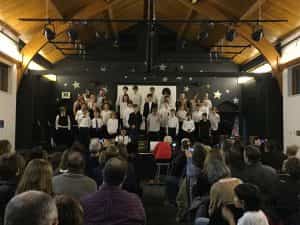