Mack Littleton 5th and 6th graders created a Latin American mercado (market) in alignment with the International Relations Unit of Inquiry. Inspired by a conversation with a student who suggested that it would be fun to have a market, Spanish teacher Susan Jenkins guided the students into an inquiry on Spanish-speaking countries, their products, crafts and currencies. The students then created a market where they browsed, bought and sold items they created – all using their Spanish-speaking skills, of course.

Each market booth featured a typical product and currency from a Spanish-speaking country, based on the students’ research. The booth had each country’s flag, some information about the country and the currency 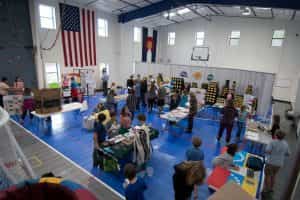 exchange rate. Students used appropriate Spanish vocabulary to sell and buy products, as well as had friendly conversations in Spanish. They mingled amongst the booths, greeting each other and making their “purchases,” which included artisan crafts as well as homemade foods like churros, cocadas and frutas.  The conversations included a good deal of bargaining, as students practiced this Latin American cultural skill.

To prepare for this event, students reviewed which countries speak Spanish and practiced their map skills. They then chose and researched two countries before being placed with a partner for the booth project. Practicing collaboration, the students worked with their partners to research their country’s flag, major exports, currency and interesting facts. They found currency exchange rates and created currency for their country, estimating how much they would need to buy products at the market and give change at their booth. Reviewing Spanish numbers from 1 to 1,000,000 was important in this project!

The students also researched typical crafts of their country, decided which items they would sell at their booth and created their wares. Parent Danna Liebert taught a group of sixth graders how to do simple weaving and some students incorporated that skill into their chosen craft. 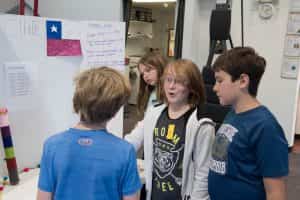 During the afternoon of the mercado, the gym was bustling with activity and students could be heard using their Spanish vocabulary to greet one another, determine the prices of items and even bargain for the best deal. Parents and staff got into the spirit as they visited booths and asked questions about each country and its products.

After the market, students reflected on the experience. One student said, “I enjoyed selling and being sold out and saying the Spanish and shopping.” Another shared that “I thought the market was so fun and it was a great opportunity to learn Spanish in a fun way.  I would like to have another market.”  Another child’s comment was: “This is one of the funnest projects I have done in school.”

Ms. Jenkins, who is new to Mack Littleton this year, was thrilled to share this experience with the 5th and 6th graders.  She loved learning Spanish and about different cultures as a 7th grader through high school.  She studied Spanish in college and did a study abroad program in Mexico. She says, “Because of my travels, I’ve always known the importance of speaking another language.  I love teaching Spanish by giving a purpose to speak and to allow for each student’s interest and creativity to flourish.  This particular unit was perfect to do that!” 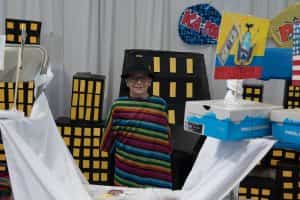