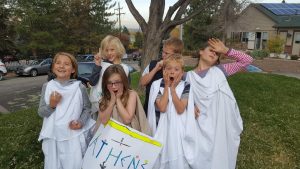 Mackintosh Academy Littleton third and fourth graders recently completed their “Where We Are in Time and Place” International Baccalaureate unit of inquiry, focusing on the history of Ancient Greece. This unit invited them to explore how the people, beliefs and values of the past influence who we are today. Rather than slogging through dry tomes for facts and figures, students collaborated on the questions they wanted to explore: “Why study ancient Greece? Where can we find ancient Greece’s influence in our lives today?” Lead teacher Lula Guilbert and associate teacher Heather Thomas guided them through ancient history with wisdom and focus.

Finding history in the modern world!

The answers the class found were astounding. From math to mythology to architecture to cuisine, students investigated and discovered that the Greeks have left a lasting mark on modern Western culture. Students noticed Doric, Ionic and Corinthian columns in Denver architecture, and learned about concepts such as Pythagorean triangles and Golden rectangles. Some students with personal connections to Greece brought in family heirlooms and shared their stories with the class.

In Physical Education, the Greek Olympics were a focus. Students learned about the ancient games of the Olympics, and participated in some lively simulations of chariot races, discus, javelin, long jump, and equestrian events. This unit nurtured the bodies as well as the inquisitive minds of these young learners.

As so often happens at Mack Littleton, what’s being learned in the classroom spilled over into the students’ playground time as well. Sparked by their interest in Greek mythology, the children created role-play games at recess and built “artifacts” from ancient Greece such as helmets, shields, telescopes, and Trojan horses.

Sharing knowledge with the community

The culminating project of the unit, and one of the highlights for students and teachers alike, is the Greek Agora, where Greek history comes to life.

Agora, which literally means “gathering place or assembly,” was a central public space in Greek city-states. Students built their own version of this market/meeting place. Sporting chitons (Greek robes) they created themselves, students showed off visual displays and interactive elements to share their knowledge of Greece with the Mackintosh community, including students from other classes, faculty, and parents. Presentations included Greek monsters in mythology, the Trojan War, astronomy, and Pythagoras. A selection of Greek food added extra flavor to this event.

Via the inquiry-oriented, hands-on nature of this International Baccalaureate unit, the third and fourth graders traveled through ancient history to discover themes, concepts, and connections developed by the Greeks that are still very much alive today.