Art and the Pandemic: Getting Started! 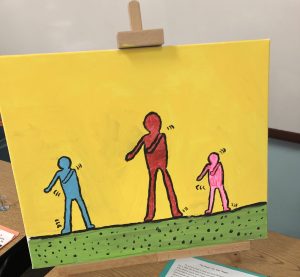 Our Visual Arts Teacher, Christy Allen, shared her thoughts on art – why we do it, what is is, and how we might consider practicing art even in these challenging times. Here is the second in the series, with some of Christy’s insights on how to silence the inner critic and get started creating! She also shares some art exercises you can use to get started.

When it comes to artistic creation, many cannot begin without sending out an invite to the judges.  Those judges may be perceived to be outside of oneself, classmates, other people in the room, etc., or they might be those internalized judges so familiar to us. In any-case, they are never too busy to pop in with some authoritative declaration, almost always a downer! I hear time and time again, “I’m no artist!” or “I can hardly draw a stick figure”. First of all I question why the stick figure is the low end of the skill scale? Did no one inform Keith Haring of this?

For many young adults (and adults)  the space between beginning, and delivering a masterwork feels sort of embarrassing, and the question of quality is viewed in black and white. Of course, self reflection in any endeavor is a good practice however, I would argue, asking ourselves “Is it good or is it bad?” is an irrelevant starting point (especially if we haven’t even begun), and perhaps is not a helpful question throughout. How can you possibly know if a work is interesting to you until you’ve met it and conversed for a time?

Make Your Own Rules

Many artists that we now consider masters did not let the good/bad standards of the time stop them from following a line of inquiry. They were deep in conversation and invented the “words,” the rules, as they went. They pushed art forward by refusing to consider an external good/bad scale. Which is not to say they did not have one of their own, but most certainly, in the cases where they succeeded to produce innovative work, they did not shut themselves down before they had even begun.

As with any relationship beginning a creative endeavor, can be awkward at first, halting with long moments of silence. Especially so, if you enter feeling nervous or with high expectations. Many gifted students excel at high expectations and perfectionism.  The thing one imagines, is often different once it appears in the world outside of one’s mind. It has a life of its own so to speak, and if the goal is to hold it to one’s mental blueprint it will often disappoint.

An idea is rarely born fully formed, it has to grow. We cannot know what something will be until it is. I believe artistic expression is the result of a back and forth between a person, their intellect, emotions, associations  and the life of the medium, the place, the world outside of themselves. For example, a random line one draws, might have the feeling of a wave, or something more abstract, like the feeling of the sound of a trumpet. Not all lines are alike. Unless one is willing to let go of the need to dominate over the conversation, the exchange can be one-sided and less fulfilling.

For gifted students I have found artistic exercises that set the student up to follow rather than lead helps the student focus on the process of creating rather than hyper focusing on what they wish the end result to be. The reason this is positive is that it allows the student to work for a time, keeping the judges at bay. They can blame the “limits” of the assignment for the results instead of knocking themselves. It seems less personal if they feel they themselves were not in charge. It also allows for space enough, to sit back and take in the results, judging them on their inherent qualities. For example, if the assignment is a blind contour drawing, which is a drawing in which the student is asked to look at something, say a pot of flowers, then asked to close their eyes and draw it from memory without picking up their pencil from the paper. There are two points in which the student is being asked to let go of control. When they close their eyes, and when they are restricted to keeping the pencil lead on the paper as they draw, without lifting it. These are things outside of themselves they can blame, if they don’t like the results.

Often though, a surprising thing happens, often the results are interesting. This gives the lines themselves a chance to be heard. A line’s quality is not limited to its ability to impersonate something else, it has a life that perhaps can be associated with a feeling that reminds one of something. It truly has an energy all its own. Once that is discovered, one moves into a more balanced relationship with creating – one in which an individual makes a move and listens for a response, and so the engagement, or even joy, weighs heavier in the process and less heavy in the result. And so the practice of creating becomes a sentence with commas, that allow for pauses but a continuation, instead of periods that stop one in their tracks, and forces one to start over, and over again.

Begin YOUR Conversation with Art

If this approach appeals to you, I have included a series of exercises you can try. Some of the exercises ask that you draw things, but the focus is on the looking and noticing as opposed to techniques. Learning technique is important, like learning different languages allows you more opportunity to communicate, however in my opinion it is simply a means to allow for further conversation, and so first the conversation must begin.

Notice the focus is not on the drawing but rather the “seeing”. Learning to draw is largely about learning to look and to become conscious of what one sees. We can conjure up an image of a flower in our heads, oftentimes when setting out to draw something we rely more on the memory of it then what we see in front of us.  We can get frustrated in ourselves and our drawing because our memory often is  not as detailed as we feel it is. When one shifts the importance in the drawing to looking and seeing rather than “drawing a flower” we end up recording the details that we see, increasing the chances of losing oneself, being engaged in the process, rather than rushing to an end result or product.

In this lesson the focus is on fun and engaging creative thinking. Beginning this way can spark ideas that lead to further engagement. This lesson is about using your creative mind to make connections between found objects and what they could possibly be or what they remind one of. A next step could be to combine the newly characterized objects into one drawing. How do they interact?

Curious about how our inquiry-based, cross-disciplinary approach that fully integrates the arts into our daily instruction? Learn more.